The Return of the Catalinas?!

A new wrinkle in the timeline of the Catalinas has appeared in the form of this ad sheet we recently unearthed. Based on the Lake Street address on the bottom, it dates from no earlier than mid 1970.
According to this page, the four original members of the Catalinas (Al Posniak, Jim Kelly, Harry Wheelock and Bob Dix) were set to reunite and start playing limited gigs again. Unfortunately, it doesn't seem that day ever really came. By 1972, Al was in bad health. He chose to sell Target and the Neenah facilities to Dan Liebhauser, and moved to Illinois to recuperate near his family following surgery for a brain tumor. Harry went back to his day job in Milwaukee, and Bob went back to the Inn. It makes one wonder, what if...


This will be available soon in our text repository along with other written items, including our transcriptions of the Post-Crescent. Until then, please enjoy this slice of an alternative outcome for the boys (formerly) in gold.

From the ad copy:

"NEENAH, WIS. — One of Wisconsin's most famous rock bands from the past is returning after three years of retirement. The Catalinas, billed as Wisconsin's No. 2 rock band during most of the group's existence, is again playing on a limited basis only.

The Catalinas were formed early in 1962 by Bob Dix, James Kelly, Alan Posniak, and Harry Wheelock, all from the Fox Cities area of the state. After achieving an almost immediate popularity the Catalinas went on to become the state's No. 2 rock band, to set record crowds at over a dozen clubs, bars, and dancehalls in the midwest, and to become the second band from Wisconsin to be signed to a major recording company, Chess Records of Chicago.

In 1966 the Catalinas decided to broaden their horizons and to see the country. They dyed their hair gold, had special gold uniforms made, changed their name to the "Golden Catalinas," and left for a national tour, playing nightclubs throughout the country.

The tour did little for the group except to extend their popularity. In 1967, Posniak decided to leave the group and enter the business side of the music industry. Shortly after leaving the stage he formed Target Productions, a recording company and a public relations firm.
Kelly decided to leave the stage a short time later, forming J.K. Productions, a booking agency and management organization.

Six months later, in the spring of 1968, Wheelock and Dix, after a six-year partnership, dissolved the Catalinas completely. Dix bought a bar in Kaukauna, his hometown, which he calls Bob's Inn, and Wheelock accepted a position with Giddings and Lewis in Milwaukee.

Recently old rock and roll has been making a strong comeback, and Kelly has been getting numerous requests from his clients for his old band, the Catalinas. He asked the former members of the group if they would like to play again, on a limited basis. Be-cause of their commitments, the others agreed, but only on a very limited basis, at very select places. 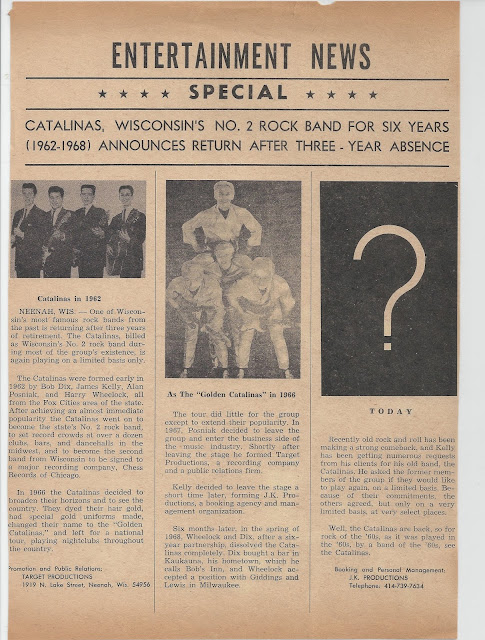 Thanks to Dan Casaletto for finding this amazing relic!
at September 23, 2019 No comments:

Originally written by hitmakers Gerry Goffin and Carole King and released by several artists including King herself, this 1973 release by Glenn Cass was cut at the famed Muscle Shoals studio and mixed by Nashville mixing desk wizard Charlie Tallent. One of only 2 singles released on the post-Target DBL International imprint by Cass' manager and label head Dan Liebhauser.

This was a special request by Glenn's long time friend and musical cohort Jerry Lakes, who retired from live performance just this past weekend.
Thanks to Jim Tuyls for providing us with an unplayed copy, in its original sleeve bearing Mr. Liebhauser's original DBL business card! 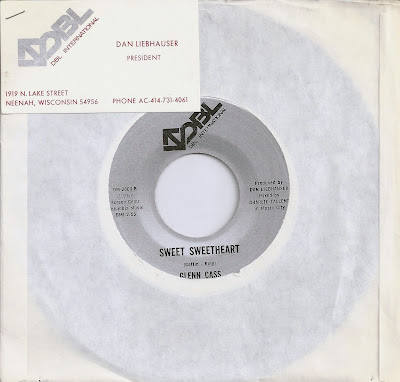 Took a nice long drive up to Marinette and added 3 more records to the Target library, along with a copy of Denny Noie and the In Crowd. The Glen Cass record completes our set of the 15 blue labeled records released between 1960 and 1970, and the two Tee Pee single are in museum grade mint condition, and will be made available for audition shortly! A very fruitful day here at the archive. 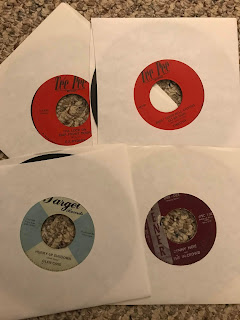 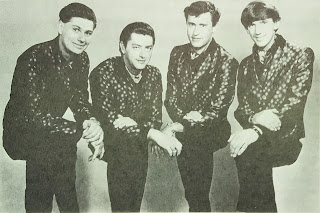 Enjoy!
Thanks to the producer of this track, Love Society and Sunblind Lion singer/drummer Mike Dellger, for this request.

If you have any photos or stories of this band, please leave a comment below!!
at September 10, 2019 2 comments:

A big thank you goes out to everyone who tuned in last night to our show on WMSE, as well as Paul Host, Tim Noble, and the rest of the team at the station for inviting us on. Don't forget, the show is available to hear on demand at the 2 links in the Aug 30 post. If you had any info or items to share, please email us at TeePeeAppleton@gmail.com or call our Google phone at 920-383-1046 and leave us a message! (We will only respond to left messages as the number is not directly connected to a phone line.)

If response is good enough, perhaps we will make a second trip to Milwaukee and bring you more stories and music! Let the station know if you liked us!
at September 01, 2019 No comments: