Welcome back, readers, to our first full article. RRtV.com is very pleased to bring you today's piece. This record marks an important milestone for our project. With this acquisition, RRtV is only 10 discs from a complete library of known Target Productions releases. This spans roughly 70 singles and nearly a dozen LPs! Several of these records have been entirely unknown until our discoveries, and we are looking forward to showcasing them all to you, dear readers!

As with all of our posts, please comment if you like the story, or if you have information to share about the music, and especially if you can help us flesh out the details behind any of our featured artists (photos and recordings are HIGHLY encouraged, but we love to hear stories from you as well!)

Anyway, on with the show... 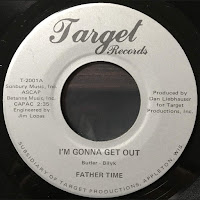 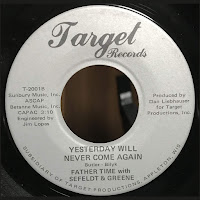 Today's release comes from 1971, during a big shift in direction for Target. Records are coming out far less frequently, and focus is shifting from younger pop acts to more mature, adult led groups. Producer/A&R lead Dan Liebhauser (a name now synonymous with the Oshkosh based Country USA festival,) is playing an ever increasing role in the business end of Target Productions, and by the end of 1972 will have taken over operations at 1919 North Lake St in Neenah, eventually re-branding as DBL International. More on that in a future post.


Both sides of the disc are covers of songs by Canadian band The Bells. 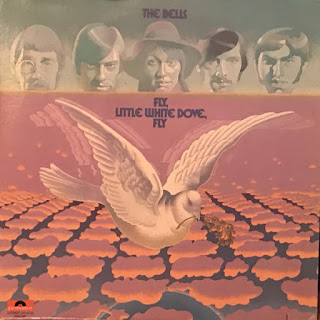 From their sophomore LP Fly, Little White Dove, Fly, "I'm Gonna Get Out" and "Yesterday Will Never Come Again" are fairly simple early 70s pop. "Yesterday..." has a light country pop flair that wouldn't put it too far out of place for some of Mike Nesmith's early country-tinged Monkees tracks (though decidedly lacking the musical ambition of such.) It's also interesting to note that the break-out single from the album, "Stay Awhile," was so successful that Bells' label Polydor repackaged the LP later that same year re-titling it to match the single and updating its cover art. This is a not uncommon practice, even today. 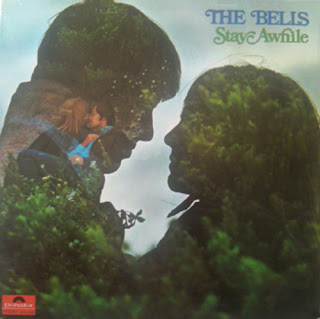 from the Bells LP:


These two tracks are an interesting choice of cover material, as unlike most of the album neither song was issued as a single. It is possible that they had local radio play. Early FM disc jockeys had a bit more freedom in what they played, and full album sides, such as the one on which these songs are buried, were the format of the day.


The Jim Lopas engineered, Dan Liebhauser produced recordings carry the trademark sound of Target in its waning years. Clear, upfront vocals and defined upper mid-range with diminished bass response. Clearly these recordings were still targeted (no pun intended) for AM radio and lower end home record players, still being pressed in mono despite stereo singles had generally become the standard for most labels past 1970. Whether these were mixed as mono, or the master recordings were requested to be folded down during the mastering and pressing phases is unknown.


So who are Father Time? We don't quite know. According to Gary Myers, the band included Al Jebavy, formerly of the Manitowoc-area garage band the Chevelles on guitar/keybord/horns, Bob Hinze of the Vikings on bass, Steven Feudner on guitar, and Darrel Mand, late of the Chain Gang on drums. Sadly, Jebavy passed away in 2001. Mand ran a music store through the 1970's, and currently still lives and works in Plymouth, WI. We are planning on getting in touch to hopefully fill the gaps in our knowledge base. Hinze and Feudner's whereabouts are currently unknown. We also have no info on who "Sefedlt & Greene" were. If any of our readers have more info, please comment below, email us directly or join the discussion at our Facebook Group.

And now the technical stuff. Target T-2001 is currently the earliest confirmed release in the silver label series of singles. These were released between 1971 and 1972, during the final years that Target was owned by Al Posniak. It was clearly a time of transition and reinvention, as is exhibited by the script logo on silver backing, the only known disc of its kind in Target's discography. Subsequent releases all have the logo as "target." in lowercase with a final period. It hindsight, the subdued banner with miniscule font and full stop along with the gray background seem rather dour, considering the labels eventual fate. 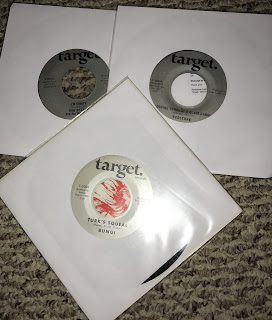 Another note; "Yesterday..." features a guest artist byline to "Sefeldt & Greene," two people we have absolutely no information on. Any sleuths out there should take note: "Sefeldt" is possibly a typo, as the common spelling in Wisconsin is "Seefeldt." Misspelled last names will be a repeated theme across Target and Tee Pee's label, though as an independant record company in the 60s/early 70s, they were far from the only offender.


All posted audio is copyrighted to its owners. RRtV does not claim any ownership of the recordings.
at May 13, 2018